What advisor wouldn’t like more dough? Maybe you can get it, if you follow the smart people at dough, the online trading and finance platform from the geniuses who also bring you tastytrade.

Investors are generally more active and involved with their investments now. They expect more from their advisor than a pre-packaged, pre-calibrated buy and hold strategy. dough and tastytrade can help you become an involved, self-directed, confident investor.

END_OF_DOCUMENT_TOKEN_TO_BE_REPLACED 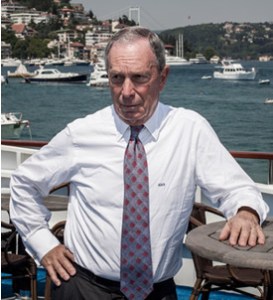 Ex-New York City Mayor Michael Bloomberg will return to Bloomberg L.P. as CEO of the company he founded in 1981. In recent weeks he’s been spending more and more time at the Bloomberg headquarters, the Bloomberg Tower at 731 Lexington (see below). It was agreed that current CEO Dan Doctoroff would retire at the end of the year and Mike (as he’s generally called) would take over the top spot. How do I know this? I read it in The New York Times, not in Bloomberg, which has had an ongoing policy of not writing about its boss while he was Mayor.

Okay, I’m going to date myself. I remember when Bloomberg was a new invention, on par with CNN (we called it Chicken Noodle Network). We’d squire clients to Bloomberg and Mike would be there pacing the halls like a manic entrepreneur. The story of Bloomberg is legendary. Mike took his $10 million severance from Solomon Brothers and launched Bloomberg to get valuable, real-time information to Traders and Wall Street. Merrill Lynch bought the first 22 Bloomberg terminals. Today there are 315,000 Bloomberg terminals out there, at about $20K annual fee each. Michael Bloomberg has a net worth of approximately $33 billion.

The Bloomberg Tower was completed in 2004. Paul Goldberger, in the Aug. 6, 2007, issue of New Yorker magazine, lauded the Bloomberg offices as “a newsroom truly designed for the electronic age … a dazzling work environment tucked inside a refined but conventional skyscraper.”

Clients are amazed when they first visit Bloomberg. What’s it like inside? Take a fun tour in the video below. 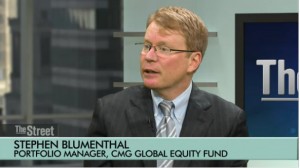 Steve Blumenthal, CEO of CMG Capital Management Group, talked to Gregg Greenberg at theStreet in New York yesterday (video below). The market is  overvalued by 20% after last year’s rally and bond yields remain at record lows, so the traditional 60/40 stock/bond split is not optimal, says Blumenthal, portfolio manager for the CMG Global Equity Fund. Blumenthal says a better way to allocate assets is 33% in stocks, 33% bonds and the final 34% in a tactical trading portfolio. His most recent tactical trades are going long the SPY and TLT exchange traded funds, as well as the Pro Shares Ultra Short Yen ETF.

END_OF_DOCUMENT_TOKEN_TO_BE_REPLACED

Season 1 of the InvestmentNews Practice Makeover series has come to an end. I want to applaud the brains at InvestmentNews and the marketing people at Oppenheimer Funds for an innovative marketing approach.  I found the series engaging, informative, results-oriented, approximating a reality series that has applicable value to advisors.  As video has become ubiquitous, good video has become even 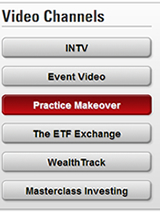 more citical. Engagement and a shared sense of struggle makes this series stand out.

Also impressive are the InvestmentNews video channels and shared content arrangement with Crain Communication, which includes Crain’s Wealth in Crain’s New York Business, which I read religiously (it has its place in the pantheon of NY media). InvestmentNews represents a new level of media coverage for advisors, and a confirmation that advisors are important audience to reach and influence.

END_OF_DOCUMENT_TOKEN_TO_BE_REPLACED 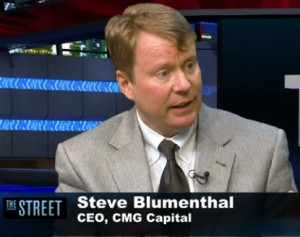 We are in an investment environment that offers historically low traditional investment returns. Today, the projected return on the traditional 60/40 model is the lowest in 140 years at 4.26% (excluding management fees), according to Research Affiliates, LLC.

Instead, Blumenthal and CMG favor a tactically managed 33/33/34 strategy that combines many non correlating risk diversifiers to smooth the return stream for investors by managing risk while enhancing returns.

Blumenthal favors 33/33/34 as a better definition of a balanced portfolio today. Enhanced Modern Portfolio Theory didn’t fail the last 12 years; the failure occurred in the construction process. The risks were too concentrated because the solutions were unavailable to most investors. Today the solutions exist for all investors, and advisors.