Wasn’t Chelsea just a gawky kid running around the White House? Did this just happen? Chelsea Tweets her birth, Bill and Hillary re-Tweet and post on Facebook and then the AP picks it up? Wire services follow social media, and media savvy grandparents cover the globe with a single Tweet.

I don’t want to be cynical but does this not seem like a perfectly timed event for a Presidential run? You have to marvel at the sustained and expert political savvy of every generation of the Clintons.

From The New York Times: 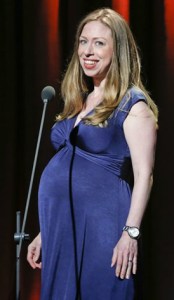 Chelsea Clinton has given birth to a daughter, a message posted to her verified Twitter account announced early Saturday.

The baby, named Charlotte, is the first child for Ms. Clinton and her husband, Marc Mezvinsky. “Marc and I are full of love, awe and gratitude as we celebrate the birth of our daughter, Charlotte Clinton Mezvinsky,” read the Twitter message.